Legs in the air - again!

As I blogged before, this sewing challenge was thrown by Nathalie.

Nathalie is my NSP this year: Non Secret Pal. This means that we exchange this year, mails, chats,birthday presents, a card when you go on holiday...that kind  of stuff. Someone you know but want to know better. Someone you like and think about regularly. A Pal!

So I couldn't resist and just make a dress for Linou's daughter, I wanted to make one for Nathalie. This stressed me out quite a bit as Nathalie is an exceedingly good seamstress, of a professional standard; she's unbelievably good at what she does and has impeccable taste and results. So much so, that she was contacted by the TV channel M6 to ask her to come and audition for the French version of the 'great British Sewing Bee' ie: Cousu Main.

She hesitated but eventually agreed and she made it to the top 20 final candidates! What an achievement...So you can imagine that sewing for her..can be intimidating, as she can obviously do a much better job than I could. Ever.

But, she's my NSP, so taking part in her challenge was obvious, and wanting to make something for her too. Daunting, but obvious.

So I made two dresses; one for the challenge and being my NSP and one because she partakes in my 2014 hand made give away (la ronde de l'année). This give away was launched in January this year; you post about it on your facebook page or blog, and the first 5 people that react would receive a home made present in 2014 on the one and only condition that they do the same (pay it forward).

Anyhow, two dresses, a lot of stress, and not so satisfied with the results but here we go:

One knit dress based on the Day to Night top, just slightly modified and hopefully the right size (she's a small 36! ). I love the top and making it into a dress seemed fun. 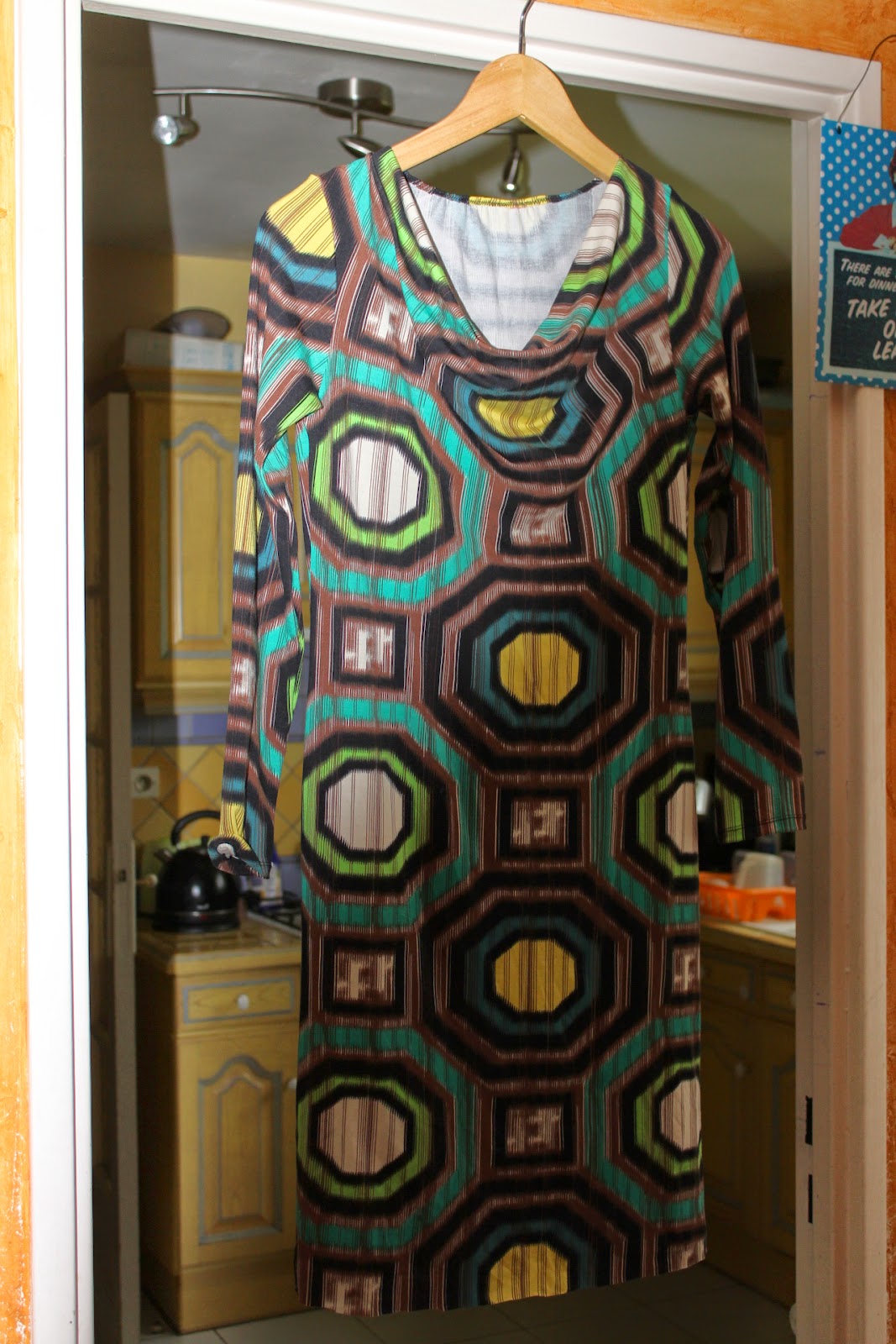 a simple straight dress with a drape neck in front 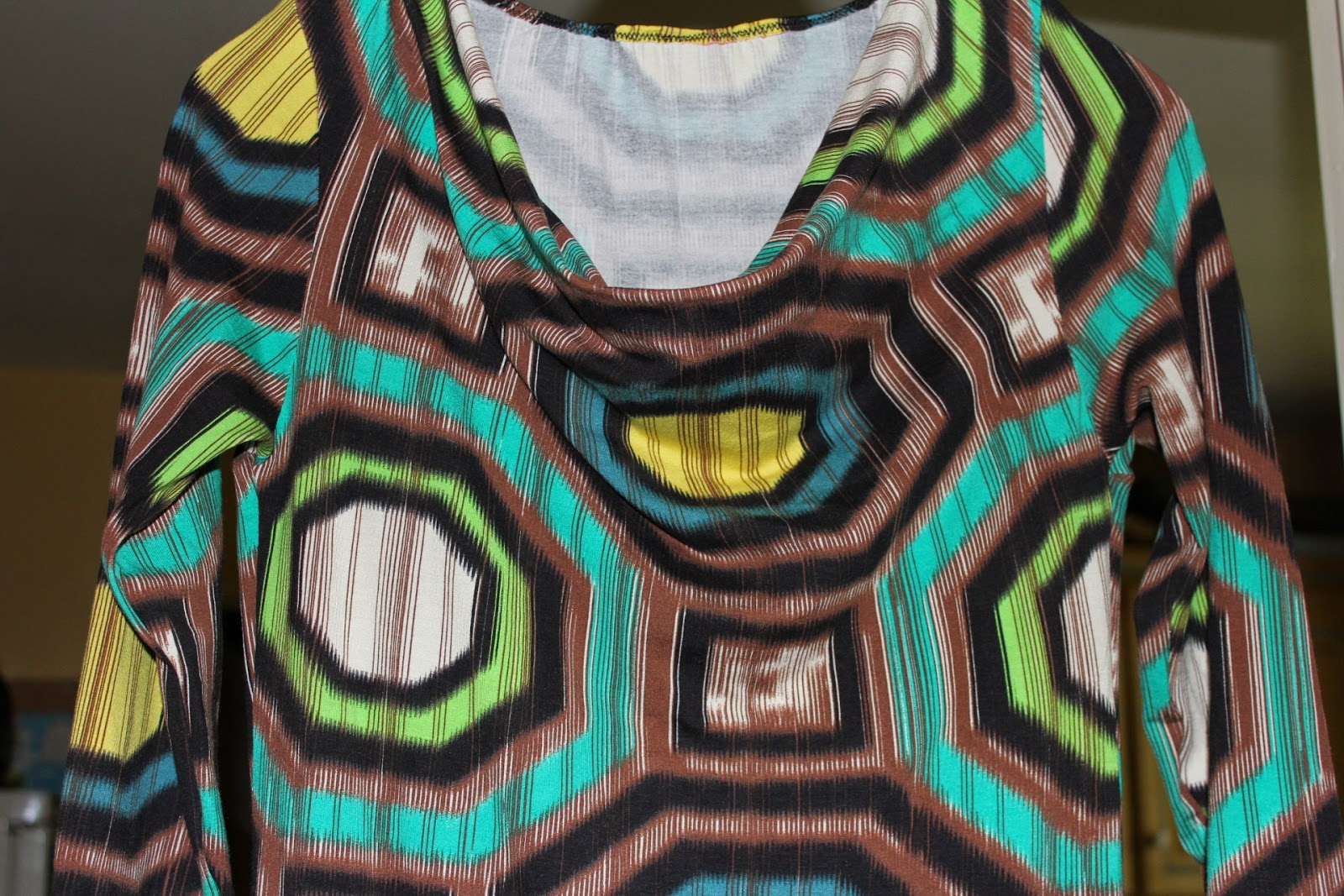 I liked the retro look of the fabric and thought it'd suit her, and I think  it's probably a little too long for her (kneelength whereas above the knee/mid thigh would be much better), but I decided to leave it like that as she can always shorten it herself if she wants/needs to and also transfer the dress into a short sleeved or sleeveless dress  (or cut it lots and make it into a top. or dusting rags. )

And another knit fabric dress (Red Velvet dress pattern ) a little bit retro, which I like, and thought the playful cut would quite suit Nathalie.  The choice of fabric seemed prefect for the cut and design but by God was it difficult to sew, so fluid, slippery and thin..^^

Just hanging there I don't like it. It looks..so unexciting. 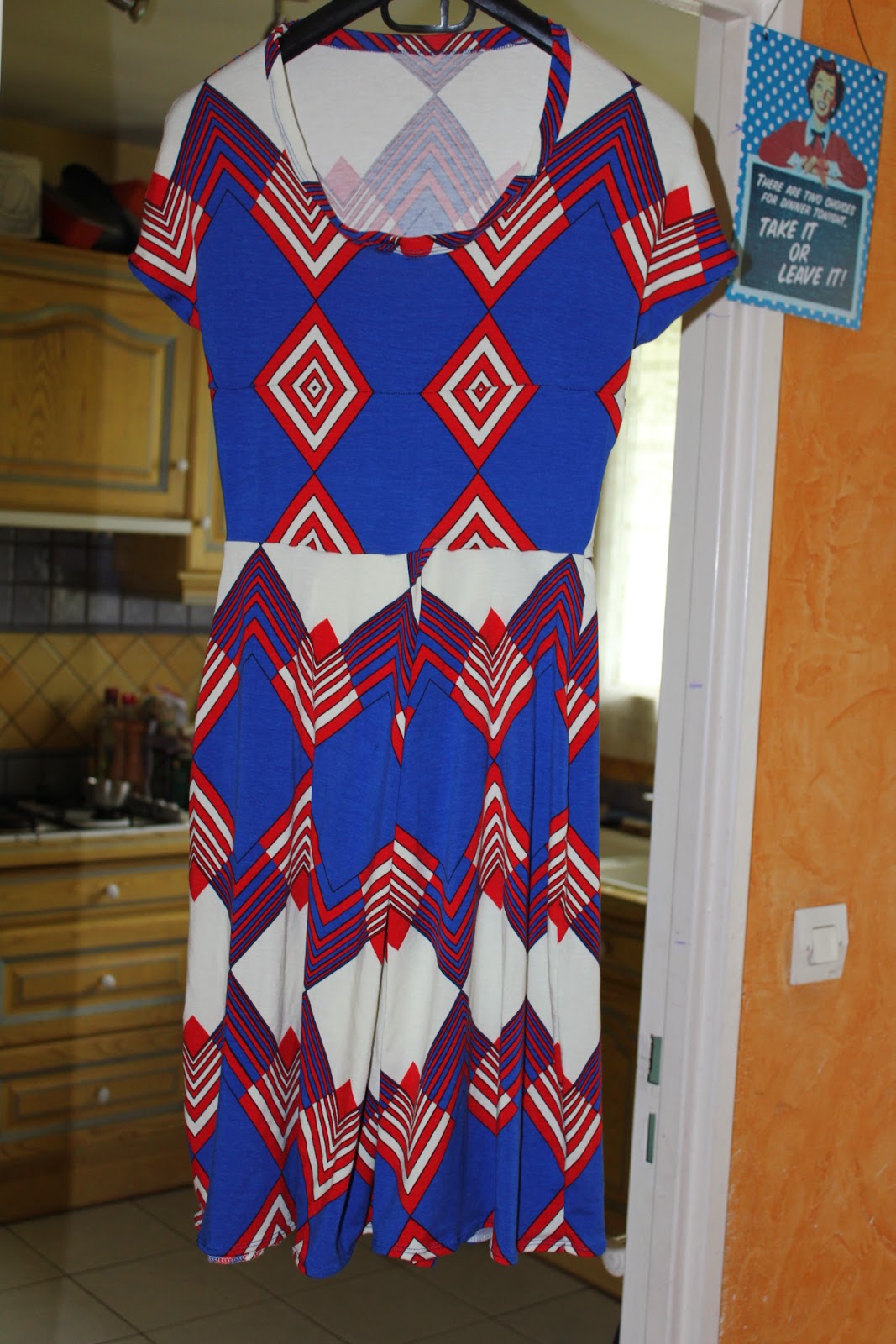 But once you wear it, it kind of flows open (well, that's the idea, I hope it works!!)
and it should look something like this (with thanks to daughter Anna who holds it up nicely): 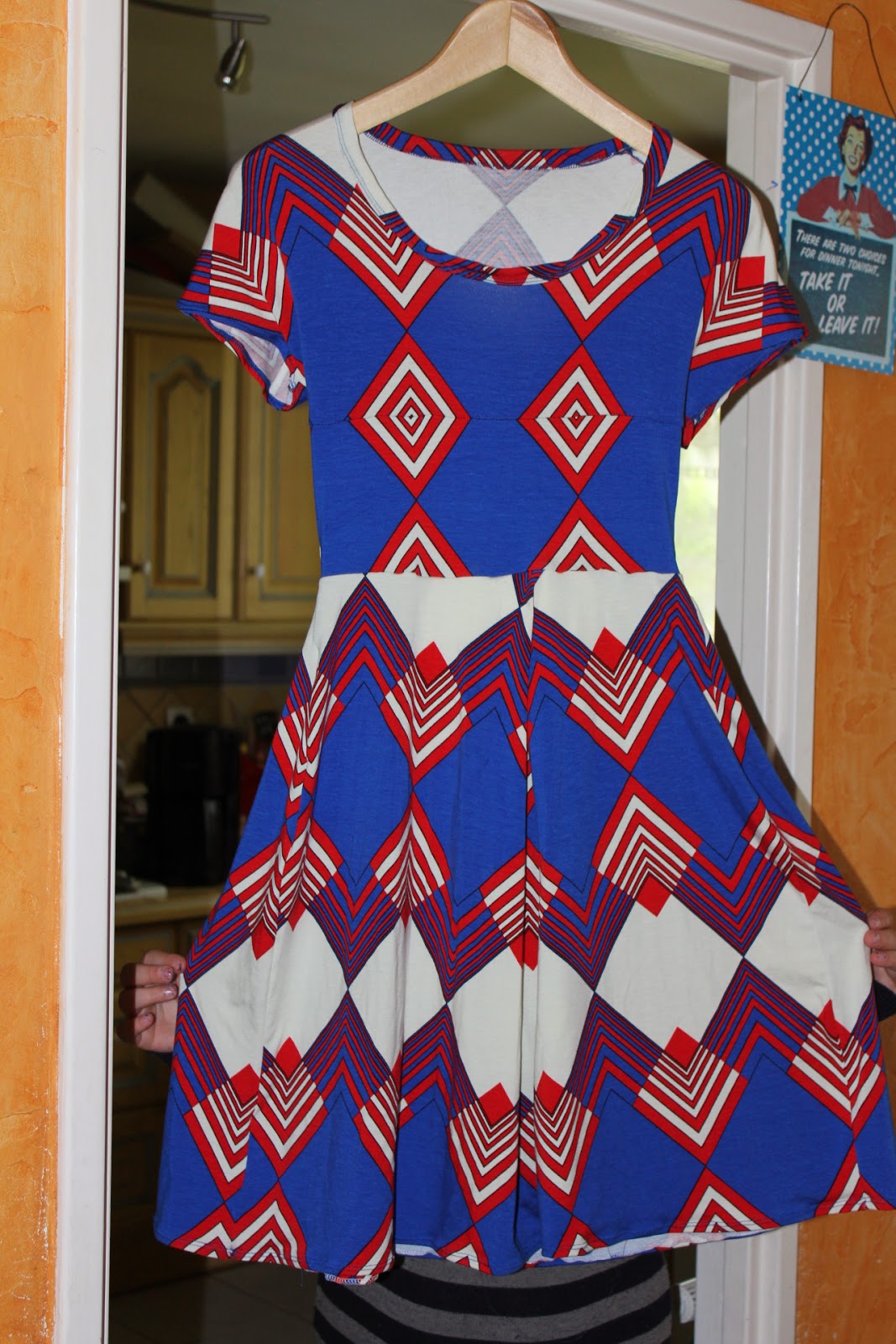 And the one thing I am actually satisfied with, is the middle bit, the dress has three parts: the bust, the waist and the skirt. And although I thought the pattern would be fun for this dress as it flows open when wearing it, it took me a little bit of time and patience to ensure the pattern was continued in the bust and waist parts...

ahhh very satisfying to have at least managed that bit okay! 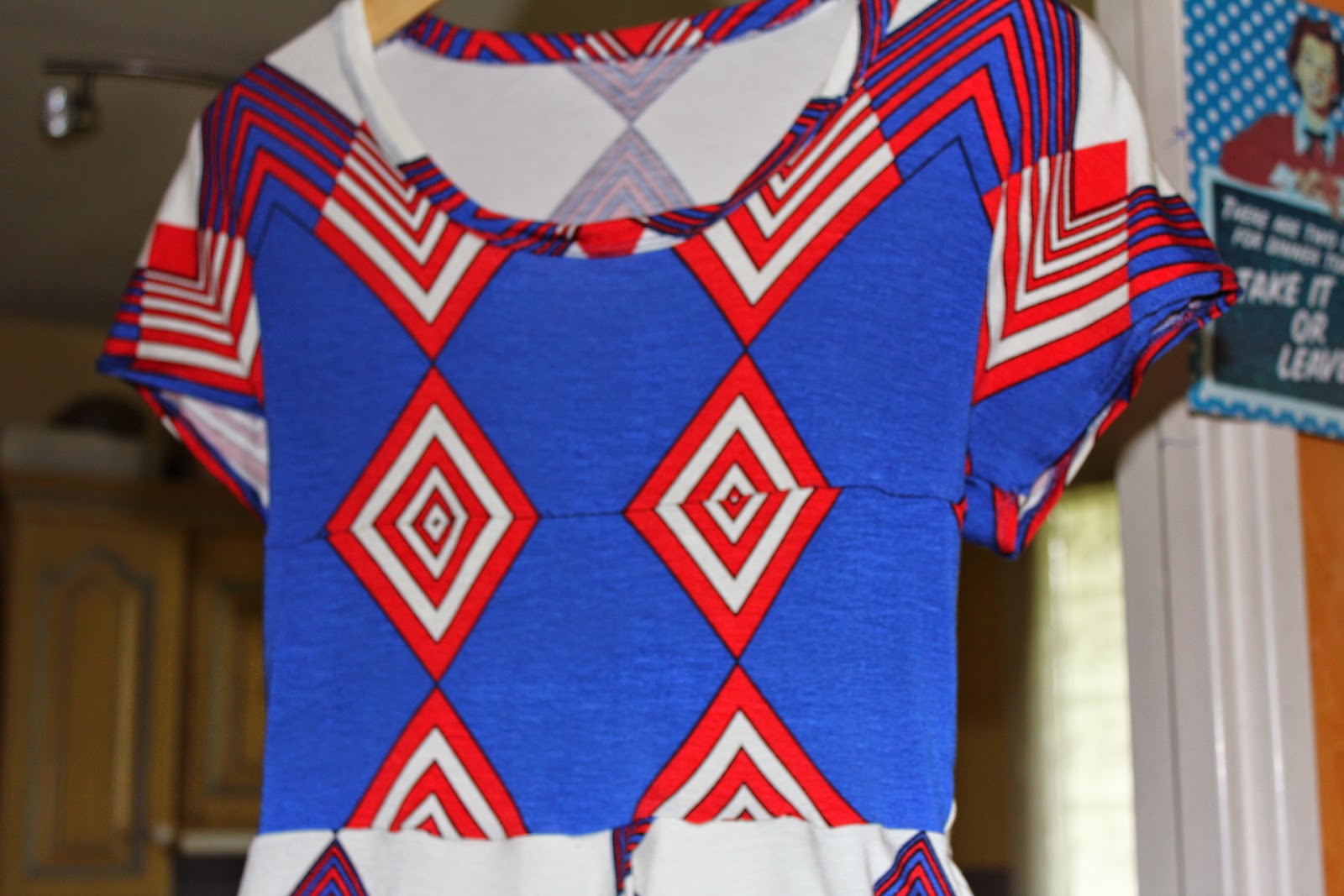 Nathalie - please don't hesitate to modify the dresses as you see fit, or wear them as pyjama's only...I will not be offended and hopefully, next time, you'll receive something that's a 100% fit!